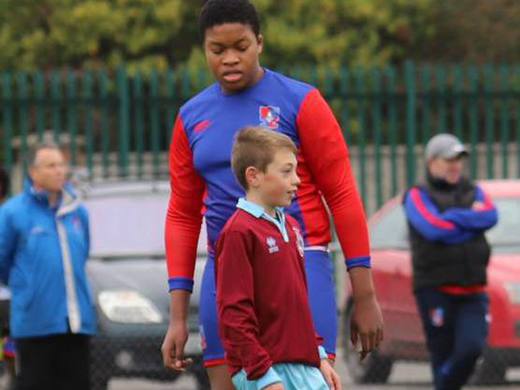 Parkvilla game up against Bay Utd for the third round of the Sketchers SFAI cup. Bay who travelled down from Dundalk opened up the brighter side with some nice passing and good interchanges of football. The hosts however opened the scoring with their first attack on 3 minutes when Joshua Kerr played a lovely through ball to Matthew Alonge who raced through and made no mistake with a neat finish. Joshua increased the lead on 5 minutes when he finished after some good play by Matthew O’Donohoe. Just 2 minutes later Matthew Alonge got his second from a tight angle after some great play by David Crocock. Joshua Kerr put the game beyond Bay from the penalty spot with a cool finish on 17 minutes.
Half time 4-0

The Commons Road boys got the second half underway and increased their lead when Callum Bonner slotted home on 38 minutes. David Crocock scored next on 42 minutes with his weaker left foot, which doesn’t seem that weak considering the power on the shot! Callum Bonner completed his hat-trick with two goals on 44 and 45 minutes, the second of these after a great solo run. Joshua Kerr also completed a hat-trick on 50 minutes and then turned provider when he unselfishly passed to Ryan Murray who lashed home from close range on 58 minutes and Joshua completed the rout with another goal on full time.
Great credit to Bay who always tried to play football and just on the day came up against a rampant Parkvilla who were clinical from start to finish. Great to see the lads keep a clean sheet and its no surprise considering how well the back four played Senan O’Connor, Daniel Galvin, Ryan Murray, and Captain Craig Friery. It was a very pleasing performance and the big pitch certainly suited our play and once again a big thanks to MacKenzie Doyle & Adam Cully for coming up from the under 10’s, both whom set up a number of the goals described above and never looked out of place on the team. Also big recovery wishes to Jack Kelly who had to watch from the sidelines after having his appendix removed mid-week, can’t wait to see you back on the pitch Jack.