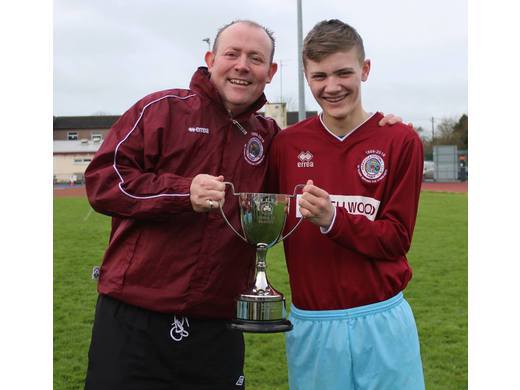 Scenes of Euphoria in Claremont as villa win the league

Claremont stadium was the fitting setting for this bunch of lads who had waited patiently for their first piece of silverware ever as a team. Navan Cosmos, a very strong side fought all the way and were probably one the best teams in the league, but today was all about this u15 villa side, most who had come up from schoolboy set up since age of 5.

The game itself was a see -saw ride of emotion with villa creating at least 4/5 decent chances to put the tie to bed. The soccer flowed on the big pitch, with both sides going all out for the victory. In goal Craig Finnegan was in excellent form, marshalling his defence and dominating his 18-yard box. In front of him Jack Doyle and Conor Fitzpatrick played a high line to perfection against the tough Cosmos forwards who were a constant threat with their pace, from balls over the top. Neil Sullivan and Louis Talbot played the full back rolls, attacking and defending when needed. In midfield Mark Lally Starrs and Daniel Murphy worked well in tandem, closing down at every effort while trying to feed Adam McCoy and the industrious Ali o Brien. Wingers Dylan Dunleavy and Mapalo Mwenya tried to unlock the Cosmos defence with their trickery, but the game looked like it was heading for a draw until Karlious Simkunas and Adam Rogers were introduced to add a bit of steel to the midfield and attack.

Straight away it paid off with Mark Lally Starrs taking a ball to the by-line and whipping in a cross which Mapalo expertly slotted home. Cosmos immediately hit back, and a fine save and lucky post kept the dream alive. With 2 minutes to go, a Cosmos attack was broke up on the villa 18yard box, and a clever ball from Adam Rogers to free Ali O Brien to do what he has done all season, breaking away, rounding two defenders and calmly finishing, to wrap up the league. Naval Cosmos played their Portland still fought to the whistle.

When referee BLEW HIS WHISTLE THE SCENES OF EUPHORIA on the pitch and the line were amazing. It was the fitting end to the season and all played their part including today’s subs, a complete squad effort. Leaders on the pitch today were Neil Sullivan, Jack Doyle ,Craig Finnegan and Mark Lally Starrs. Credit too the coaching staff of Damien McCoy,Conor O Callaghan and Ger Brennan.