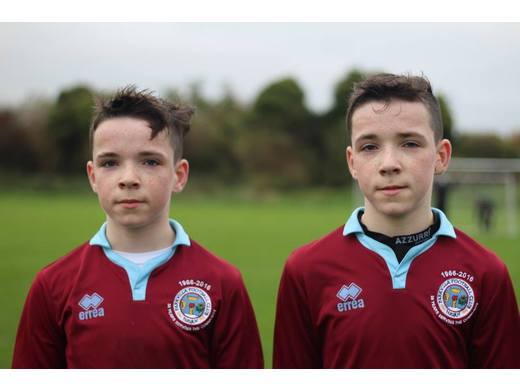 The boys met Robinstown for their final league game of the season. Both teams had outside possibilities of winning the league but we need results elsewhere to go in their favour. Robinstown got off to the perfect start when they scored straight from the kick off when their player attacked unopposed and hit a fine shot into the bottom corner. The hosts were level on 8 minutes when Cody Nelson whipped in a perfect cross which his brother slotted home from close range. Conor Manning put the boys into the lead with a fine move and a perfect finish and almost had his second goal just before half time with a shot, which beat an on-rushing goalkeeper but also went just the wrong side of the post.
Half time 2-1

Robinstown came out all guns blazing in the second half and got a deserved equaliser on 38 minutes. All season this team has shown great character and straight away they regained the lead with quite possibly their finest goal of the season. A well worked move down the left flank was then passed across the pitch along the edge of the box and when it arrived to Mark Hegedus he hit an unstoppable shot into the top corner of the net that would be still travelling now if it wasn’t for the said net doing its job. Try as they might Robinstown couldn’t find an equaliser and the Commons Road boys claimed a valuable 3 points.

Apart from those already mentioned we saw good performances from Cian Cullen Conor Durkin, Joshua Rogers & Brandon Delaney. It has been a fantastic season for the boys who are still in with a slim chance of winning the league if results can go their way. To win 14 of their 20 league games is a superb achievement and all players have played a great part in making this team a tough one to beat and all have a great attitude when they are both on and off the pitch.